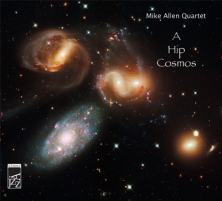 A Hip Cosmos - Art of Spirit

The Mike Allen Quartet’s 2012 impressive release A Hip Cosmos is a profound and moving series of creative and masterful compositions written by acclaimed Vancouver tenor saxophonist Mike Allen with a gorgeous closing composition from quartet pianist and composer Miles Black. The intuitive interplay from the quartet is adventurous and the moods that the group and Allen create make for some dramatic and exquisite jazz improvisation. This album is a soothing and nurturing album worthy of repeated listens and it quickly became a 2012 Rhythm’a’ning radio show favorite of mine.

As a radio producer, after the first listen to the album I was struck by the soulful and beautifully lyrical content on the entire album and the timeless and admirably grand nature of the music. Mike Allen conveys artful melodies and harmonies within his compositional writing and he is a tireless creative explorer. The quartet improvisation and compositions are divine and make for a transcendent musical exploration of the sacred. The playing on A Hip Cosmos is an honest from the heart approach with a nod towards the spiritual musical work of the venerated master and legend John Coltrane.

Getting into the realm of the cosmic, songs on A Hip Cosmos like “Oceans Under Europa”, “Love and Dark Matter” and “Give Me Moon” showcase Allen’s writing and tribute to a harmonious universe. The organic flow of Allen’s and Black’s compositional writing allows the album to unfold naturally and provide for some superior recordings. The musicians are telepathic in the way that they communicate and interact with one another after many years of performing and recording together. A Hip Cosmos is a CHLY 101.7 FM Rhythm’a’ning favorite Canadian jazz album that listeners will want to revisit and return to often.