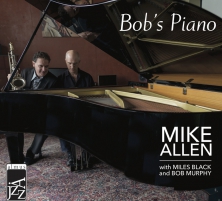 Bob’s Piano
Mike Allen; Miles Black; Bob Murphy
Almus Jazz ALM 16306 (mikeallenjazz.com)
Saxophonist Mike Allen’s Bob’s Piano is a remarkable tribute to one of Canada’s best and most inventive jazz pianists. Bob Murphy, who passed away in 2015, forged a long career, primarily in his native Vancouver, and mentored a generation of musicians along the way. The origin of the recording is a series of duets that the pianist recorded in his home. Never intended for release, they were recovered after Murphy’s death and became the basis of this unique and intimate album. Miles Black, another excellent Vancouver pianist, is heard with Allen on the record’s first six tracks. Playing on Murphy’s piano, he manages to reflect the spirit of its owner while maintaining his own distinct voice. Kenny Wheeler’s Nothing Changes sets the tone with the kind of intuitive interplay between Allen and Black that epitomizes this style of jazz. Allen’s burnished tone and understated approach mesh perfectly with Black’s melodicism, the two soloing as one at times. And You Become the Moonlight, a Murphy composition, features tenor and piano playing pleasantly twisting unison lines on the melody then seguing seamlessly from one solo to the next. Murphy himself makes an appearance on the final four tracks, beginning with a fresh take on the classic Stella by Starlight. His singular touch on the instrument, expansive time feel and boundless imagination are immediately apparent as his improvised counterpoint lines develop on Allen’s loose and inspired interpretation of the melody. Bob’s Piano is a delight to listen to and an important glimpse into one of our country’s greatest and perhaps under-sung musical heroes.